Meryl Davis and Charlie White returned from the Olympic Winter Games in Sochi, Russia, with the United States’ first ice dancing gold medal in history. Stars on Ice, featuring Davis and White along with their bronze medal winning teammates from the inaugural Olympic figure skating team event, will visit Pittsburgh on April 25 for a 7:30 PM performance at CONSOL Energy Center. 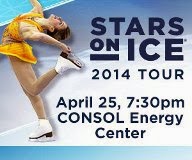 The country’s premier figure skating production, Stars on Ice, in a partnership with U.S. Figure Skating, is proud to announce that for the first time ever, the U.S. Olympic figure skating team will headline the annual nationwide tour. Bringing the spirit and passion of the Olympics back to home ice, the entire bronze medal winning U.S. Figure Skating team will highlight a truly spectacular and star-studded cast. In addition to Gold medalists Davis and White, two-time U.S. champion Ashley Wagner, 2014 U.S. champion Gracie Gold, four-time and reigning U.S. champion Jeremy Abbott, 2014 U.S. silver medalist Jason Brown, and two-time reigning U.S. pair champions Marissa Castelli & Simon Shnapir comprise the bronze medal team that will join the Stars on Ice 2014 Tour.
The Stars on Ice 2014 Tour cast will also include two-time U.S. ice dancing silver medalists Madison Chock and Evan Bates, 2011 U.S. Champion Ryan Bradley and 2010 Olympian and 2014 U.S. Bronze medalist Mirai Nagasu. Several special guests will also make appearances throughout the tour.
Stars on Ice continues to be a pioneer in figure skating by offering fans the rare opportunity to witness some of America’s most creative and cherished champions performing together in both individual and ensemble routines. Founded and produced by Olympic Gold Medalist Scott Hamilton, Stars on Ice is one of the premier family entertainment events in the U.S., and the only figure skating tour in America, bringing you the greatest performances and competitors from the 2014 Winter Games. This year’s Stars on Ice production has joined forces with U.S. Figure Skating, moving its traditional tour dates to the spring in order to showcase the World’s best figure skaters at the top of their form and to offer special opportunities for fans across the country to celebrate the accomplishments of these historic skaters.

Tickets for the 2014 Stars on Ice Tour in Pittsburgh are on sale now! Special on-ice seating is available upon request. Tickets start at $25 and are available via www.starsonice.com, www.ticketmaster.com, the Dick’s Sporting Goods Box Office at CONSOL Energy Center, all Ticketmaster outlets, and by phone at 1-800-745-3000. Group discounts are available for parties of 10 or more. Please visit www.starsonice.com for the most up to date information, as well as exciting show announcements. Stars on Ice is pleased to announce Macy’s, KOSE, and airweave as Associate Sponsors of the 2014 Tour.

We have a code for 25% off all tickets!
The code will be 25% off all P2, P3 & P4 (all tickets but on-ice).
Use code 25OFF at checkout.
This code is currently active and will be good through & including the day of the show.
Keep this in mind when ordering tickets...
When you buy 1 adult at full price, you can get 2 kids tickets at a discounted price. The 25% discount won't apply to the already discounted kid's tickets. So another option would be that, purchase 1 adult at full price, 2 kids at the kids price, and then the other adult at 25% off.

About Stars on Ice
Founded in 1986 by skating icon Scott Hamilton, the Stars on Ice tour has performed more than 1,000 shows over the last three decades. Past tour performers include Olympic Gold Medalists Kristi Yamaguchi, Katarina Witt, Scott Hamilton and Torvill & Dean. The Tour has won three Emmy Awards, one ACE Cable Award (Best Sports Special), and is recognized as the finest ice production in the world. Stars on Ice is produced by IMG, the world’s premier Sports, Entertainment and Media Company. For more information about the tour, visit www.starsonice.com. Keep in touch with Stars on Ice on Facebook: www.facebook.com/starsonice and on Twitter: @starsonice, www.twitter.com/starsonice.
By Kelly Hughes