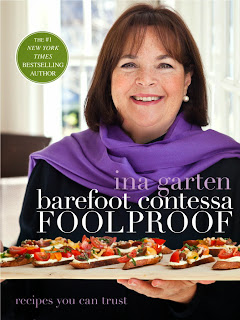 Ina Garten, the best-selling cookbook author and star of Food Network’s Barefoot Contessa is coming to Pittsburgh on Thursday, October 17 to the Benedum Center at 7:30 pm. Tickets ($45.75 & $55.75) are available at TrustArts.org, by calling 412-456-6666, and in person at the Box Office at Theater Square, 655 Penn Avenue.  This event is a Trust Guest Attraction, and produced by Mills Entertainment.
Ina Garten shares her natural approach to food; sharing tips, stories, and maybe even some recipes. On stage, Ina Garten delivers a charming insider’s view of the world of the Barefoot Contessa and the pleasures of good food, cooked with love and passion and engages the audience with an interactive Q&A.
Garten opened up a store in the Hamptons called Barefoot Contessa in 1978. Eighteen years later, the store had grown to a 3,000 sq. ft. store, which she sold to start working on her cookbooks. “The Barefoot Contessa Cookbook” was published in 1999 and was one of the best-selling cookbooks of the year. She has gone on to write seven more cookbooks, including “Barefoot Contessa Foolproof: Recipes You Can Trust”, coming out in October. In addition, Garten has contributed to House Beautiful, Martha Stewart Living, and O, Oprah’s magazine.
In 2002, Food Network approached Ina to do a cooking show based on her cookbooks and love of entertaining. That was ten years ago and her Emmy-winning cooking show, “Barefoot Contessa”, is still one of the highest rated shows on Food Network.

ABOUT THE PITTSBURGH CULTURAL TRUST
The Pittsburgh Cultural Trust has overseen one of Pittsburgh’s most historic transformations: turning a seedy red-light district into a magnet destination for arts lovers, residents, visitors, and business owners. Founded in 1984, The Pittsburgh Cultural Trust is a non-profit arts organization whose mission is the cultural and economic revitalization of a 14-block arts and entertainment/residential neighborhood called the Cultural District. The District is one of the country’s largest land masses “curated” by a single nonprofit arts organization. A major catalytic force in the city, The Pittsburgh Cultural Trust is a unique model of how public-private partnerships can reinvent a city with authenticity, innovation and creativity.  Using the arts as an economic catalyst, The Pittsburgh Cultural Trust has holistically created a world-renowned Cultural District that is revitalizing the city, improving the regional economy and enhancing Pittsburgh’s quality of life. Thanks to the support of foundations, corporations, government agencies and thousands of private citizens, the Trust stands as a national model of urban redevelopment through the arts.

Email ThisBlogThis!Share to TwitterShare to FacebookShare to Pinterest
Labels: check it out, for mom, happenin' around town, Pittsburgh Cultural Trust