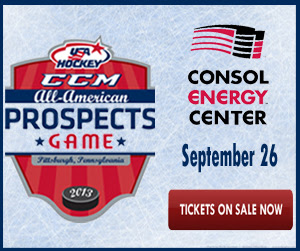 Thursday, September 26, 7pm
CONSOL Energy Center
The second annual game will feature 40 of the top American-born prospects who will be eligible for the 2014 NHL Entry Draft facing off in a display of top hockey talent from across the country. Players will be chosen by USA Hockey, in conjunction with NHL Central Scouting, with the final rosters expected to be announced in August.
"Pittsburgh is a city filled with passionate hockey fans and we're extremely pleased to work with USA Hockey in bringing the CCM/USA Hockey All-American Prospects Game to the CONSOL Energy Center this fall," said David Morehouse, president and CEO of the Pittsburgh Penguins. "It will be a unique opportunity for our fans to see the future American stars of the NHL -
some which will undoubtedly play in Pittsburgh - all on the same sheet of ice."

Tickets are on sale now at the Dick's Sporting Goods Box Office at CONSOL Energy Center, all Ticketmaster locations, and Ticketmaster charge-by-phone at 800-745-3000.
Tickets are $20 for reserved seating and $10 for General Admission. Very affordable for the whole family! 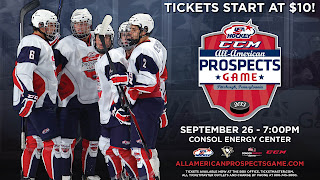 Former Pittsburgh Penguins Mark Johnson (Madison, Wis.) and Joe Mullen (New York, N.Y.) will be the head coaches for the second annual CCM/USA Hockey All-American Prospects Game Sept. 26 in Pittsburgh, Pa. Both Johnson and Mullen are members of the United States Hockey Hall of Fame and Lester Patrick Trophy recipients for their outstanding service to hockey in the United States. Johnson represented the U.S. at 12 major international tournaments, including the "Miracle on Ice" squad at the 1980 Olympic Winter Games in Lake Placid, N.Y. Mullen skated for Team USA at the 1979 International Ice Hockey Federation Men's World Championship and three Canada Cups (1984, 1987, 1991).


GIVEAWAY:
FIVE lucky winners will each win a family 4-pack of tickets for the CCM/USA Hockey All-American Prospects Game is coming to Pittsburgh!
*
Go here to enter.
*
Contest open for entries until Monday, September 9th, 2013, 9pm. Winners chosen at random. Winners have 24 hours to claim prize or a new winner will be selected.
By Kelly Hughes