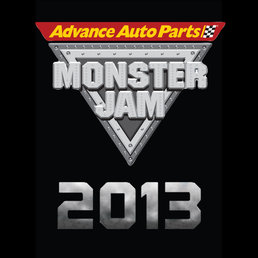 
Tickets for Advance Auto Parts Monster Jam®, the world’s premier monster truck series, are now on sale. Monster Jam is coming to CONSOL Energy Center February 15-17 and is affordably priced for the whole family with seats starting at just $20.
Go here to print a coupon for select kids seats only $10!!

Monster Jam will be performing at CONSOL Energy Center on:

The event will feature the first ever appearance in Pittsburgh of the newest Monster Truck – Zombie - along with fan favorite Monster Trucks including Grave Digger, Advance Auto Parts Grinder, Eradicator, Backdraft, Ice Cream Man, Razin’ Kane and the return of Monster Mutt to Pittsburgh. (Trucks subject to change without notice) 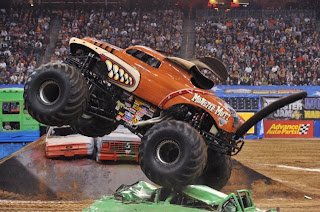 Approximately 12 feet tall and about 12 feet wide, monster trucks are custom-designed machines that sit atop 66-inch-tall tires and weigh a minimum of 10,000 pounds. Built for short, high-powered bursts of speed, monster trucks generate 1,500 to 2,000 horsepower and are capable of speeds of up to 100 miles per hour. Monster trucks can fly up to125 to 130 feet (a distance greater than 14 cars side by side) and up to 35 feet in the air.

The Party in the Pits on Saturday, February 16 and Sunday, February 17 both begin at 11am to give fans the opportunity to get a view of the trucks up close and meet the drivers of the massive monster trucks. Pit Passes are available to purchase for ticket holders of the 2pm shows for an additional $10 – a limited number of Pit Passes will be available.

All tickets and Pit Passes are available to purchase through the Dick's Sporting Goods Box Office at CONSOL Energy Center, all Ticketmaster Outlets, online at www.ticketmaster.com, or charge by phone at (800) 745-3000.

Monster Jam, sanctioned by the United States Hot Rod Association®, is the most popular monster truck tour, performing to over 4 million fans annually at the most prestigious arenas and stadiums throughout the world. Monster Jam® shows consist of three main fan-favorite elements – the pit party, racing and freestyle. The pit party gives all fans a chance to meet the stars of Monster Jam up-close while taking pictures and getting autographs.

About the United States Hot Rod Association®
The United States Hot Rod Association® originated in 1978 as a sanctioning body for truck and tractor pulling events, later expanding to produce mud and sand drag racing. The USHRA® grew steadily and within its first decade emerged as the premier Monster Truck racing organization. Today the USHRA®, together with Feld Motor Sports, produces quality events and involves coordinating competition, defining regulations and technical requirements, setting safety standards and officiating at each event. Whether the USHRA® event entails Pro Race Trucks, QUAD WARS™, or Monster Trucks, you can be sure the event will be the highest quality show motor sports has to offer, creating unmatched excitement and spectacular memories.

We have 4 tickets to giveaway!
4 tickets for Friday, Feb. 15, 7:30pm show at CONSOL. Your tickets will be held at the will call window.
*
Go here to enter.
*
Winner chosen at random. Winner has 48 hours to claim prize or a new winner will be selected. Contest open for entries until Sunday, February 10th, 2013, 7pm.
*
Good Luck!
By Kelly Hughes

Loved your post.. well done and keep it up..