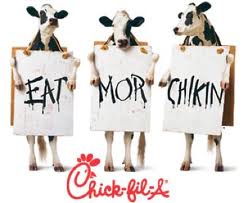 Customers who wear their pajamas to the Breakfast for Dinner event will receive a FREE Spicy Chicken Biscuit. Guests must be fully dressed in pajamas to receive the free offer. The restaurant teams will also set up crafts in the dining area for children, and the Chick-fil-A “Eat Mor Chikin®” Cow will greet guests.

About Breakfast
According to research firm NPD Group, 48 percent of Americans say their breakfast choices are driven by routine. NPD Group also found breakfast sales accounted for 60 percent of growth in foodservice traffic over the past five years.
Chick-fil-A biscuits are made from scratch each morning.
Chick-fil-A’s entry into the breakfast market came in 1986 when the then mall-based chain expanded outside of shopping centers and began building stand-alone restaurants that opened for breakfast.
Chick-fil-A has a wide variety of breakfast items to choose from, including breakfast burritos, bagel sandwiches, fruit cups and yogurt parfaits. Its signature breakfast item continues to be the Original Chick-fil-A® Chicken Biscuit.
By Kelly Hughes